Finance builds, schools starve – stupid fixable equation. How many ways can we Tweet this? 88 characters

There are simple new truths we must comprehend about the divergent nature of the global digital buffet table. The current richness and depth of the World Wide Web is built on a little bit extra. The extra capacity of people’s homes, the garage, enabled individual creativity that led to personal computers;  the extra capacity of people, government’s capital, taxes, founded the Internet and the Web. The extra capacity of people's time plus digital devices and the Web served as additional rocket fuel for the explosive growth of the data that fed the table.  When you fertilize this information age data crop, when you pump its gas, it doubles. If you haven't experienced this, get Twitter literate. The fertile data wilderness that feeds this table of knowledge is the world’s first human-built permanent frontier, an infinitely expanding information and digital age explosion of ideas.

Private and public capital did its planning atop this digital table, wisely using this foundation to plan and execute numerous oil-rig style dot.com gushers of value and profit (try listing the companies).  The smorgasbord of opportunities provided by what already sits atop the table of the Net extends over the horizon for everyone that we can seat next to it. Sadly, those seated next to it are accompanied by a sea of empty chairs.

There is also great misunderstanding about this information age table. The root of its wealth, the knowledge explosion, is silent, invisible and a dominant tsunami of power on a scale that spills over any containment that we have devised.  The fundamental nature of the table's wealth, information, is non-rival, radically different than the world of physical possessions. As Thomas Jefferson marveled at our country's founding, non-rival information means that no one loses data and knowledge that they give to others. And we now know that in this process they create more.  The empowering literacy of the digital age is now multi-multiheaded, the twin-hydras of cyberspace and makerspace. Its accessibility and its growth are spreading fastest through the least expensive digital devices that are finding their way into everyone's pocket on the planet. The tech tools are the means to the problem solving end. Note the rich collection of tools for composition and invention in its digital palette. 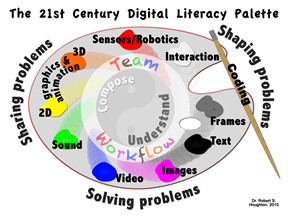 In spite of such opportunity, state schools and many families are starved for the resources to get to first base in the digital age, a computer with Net access. Students who don't have a personal digital device to take to and from school begin far behind the starting blocks. The map gives some idea of progress in North Carolina. Progress towards the first step in mining infinite information, 1:1 computing, is at a crawl. You will note that despite much desire to do so our major cities like Charlotte (Batten, 2014) and Raleigh (Hibbets, 2013) are not on board.

At the same time that financial interests are arguing for knocking down the door for H1B visa cards to import talent from abroad to drive our digital age; they are not knocking down the door to the funding for schools to support the digital literacy of the kids who are already here. Shouldn't we be making a deal to do both? The key ingredient, the key capital that is restraining future gushers and more economic and cultural wealth for everyone is more educated people that know how to leverage their digital tools. Public schools and universities are choking for the investment needed to exploit this opportunity.

A brain is a terrible thing to waste. Our culture wastes them when taxpayers conceptualize them as an excess resource on whom tax support is wasted and then teaching those that remain in classrooms as if they were containers instead of generators, using curriculum that is largely blind to to the empowering literacy of the age. It is time to end the stubborn persistence of the digital divide (Badger, 2014). In our age of infinite data, there is long term social and economic loss for every single person that is lost to the capacity of creatively working the digital frontier. It is not a case of someone else picking up the slack. There is no someone else. Everyone else that is digitally literate is already busy with their own little piece of the frontier, which continues to grow.

Politics is the allocation of resources. We have been squeezing state funds out of education based on the belief that freeing financial capital stimulates the most hiring. At a time in which anyone should be able to tap into the immense water tower of information wealth,  this squeeze on schools now does more to perpetuate cycles of poverty than it does for business growth. Too many schools and communities across our nation cannot even provide sufficient safety (For one example, see ABC News report on Strawberry Hill High School. How many of our school principals in NC could produce an all too similar video?)

In the digital age it is the educated that can and must invent jobs; today it is invention that stimulates the most hiring. Unfortunately, the "finance first" framework is a now devastatingly backwards political policy. It has historically grown out of long experience with the logic of the possession of land, goods and finance. A new and non-rival logic has upset that fruit cart of possessions and created a new and very wild vineyard. Our digital age wine needs a new skin.

Let's do the math. Poverty is far too common (Frontline report on Poor Kids). How well can we solve the equity equation by Keeping Our Eyes on the Prize, (Uri Treisman giving the M. Carl Equity Address at NCTM, 2013, http://www.youtube.com/watch?v=J6VEyCA1pN0)?

Through dated logic our culture has misplaced priorities for how to create capacity and results in the digital age. Entrepreneurs emerge through the educated that build their own personal learning networks towards their own creative goals, their projects, not those designated by the state or educators. Why is this approach of project centered education best for preschoolers and adults and not those in-between? This is knowledge that the ideas of Montessori, Dewey, Freire, Piaget, Papert and many others have been trying to communicate for a very long time. It is in fact how the rapidly expanding value of the Web builds on itself today. Now that society is deep into the digital age, our culture needs a four-lane highway to their thinking. How quickly can we flip policy designed around problems of possession to policy designed for the new non-rival and infinite fuel of the knowledge society?

Once we comprehend that the prize ingredient for everyone thriving is everyone's opportunity to learn and create from our digital  stockpile, then Treisman's data makes it clear that the greatest restraints on the education necessary for thriving are poverty and income inequality.  Said another way, insufficient quality education fuels poverty. Poverty is not just a personal problem; in the digital age it is the albatross hanging around all our necks. To build finance by starving schools is an especially stupid design in a knowledge economy. Let's work on a smarter equation; finance schools as invention engines; build the knowledge society.

Let's change all the nouns to verbs, and change conditions to actions. Not finance builds, schools starve, but finance schools, starve poverty, build economy. Are you and your organizations building the bridges that will educate every elected official possible and the communities that vote for them?

Given sufficient people capital and a goldmine to work of infinite data, it  is now not just reasonable to have a vision of the future without poverty, it is down-to-earth practical. Let's find the little bit extra. As with the Barclay's ad, "What's a vision without the capital to achieve it?"